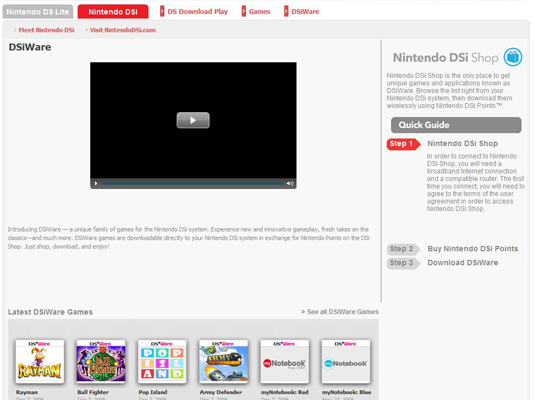 This is a list of games and applications, collectively known as DSiWare, for the Nintendo DSi handheld game console, available for download via the DSi Shop.An update released for the Nintendo 3DS in June 2011 added support for the Nintendo eShop service, which contained the DSi Shop's full library of DSiWare games (at the time) with the exception of certain games and applications.Developer: Nintendo. At the moment only two titles are confirmed to be released on DSiWare at launch, a free Web browser, and a free notebook app. Products will be payed for using Nintendo points (formerly known as Wii points). Much like the Wii, a virtual console will be available to download games from older handheld consoles. 1000 points will come with the DSi.